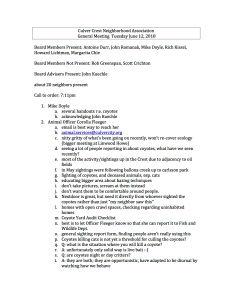 The next General Meeting of the Culver Crest Neighborhood Association will be at 7pm at the El Rincon Elementary Cafetorium.  Agenda items include:

Note that another meeting is taking place in the cafetorium that is scheduled to end right before our meeting.

Coyotes on the Crest

Coyotes haven’t been spotted on the Crest with quite the same frequency of last year, but their ongoing presence here and indeed in many areas of Southern California is an ongoing fact of life.

Even urban coyotes tend to maintain a healthy fear of man and will try to keep a safe distance. However, habituated coyotes – coyotes that have lost that fear of humans through exposure, feeding, availability of easy prey such as outdoor cats and untended small dogs – require special treatment. This treatment is called “hazing” – making loud noises at the animal, chasing after it (so long as you do not have a small pet or child with you at the time), and throwing rocks in the animal’s general direction.

Below are some useful references to help Culver Crest residents keep their animals, children, and themselves safe from potential conflicts with these very intelligent but potentially aggressive predators.

The “Keep Me Wild” pamphlet from the California Department of Fish and Wildlife offers details on how to “coyote-proof” items like trash and offers general information on coyote-human interaction aimed at reducing potential conflicts. It outlines the dangers of feeding coyotes, which is the most powerful way to habituate them and set up future conflict with humans.

The Coyote Behavior, Classification, and Recommended Response document helps individuals gauge how potentially aggressive or habituated an encountered coyote is and recommends how to handle a range of situations. Coyotes that fall into the orange and red sections of this document should be approached with extreme caution to minimize the risk of conflict. If you are with a small child or animal, it is always a good idea to get them to a safe place before attempting to haze the coyote in any way. And never turn your back on and run away from a coyote – this may trigger a “prey response” that will instigate even more aggressive behavior and possibly even an attack.

The last document is a summary of recent coyote sightings and encounters on the Crest.

The Culver Crest Neighborhood Association’s first general meeting of the year will take place on 7pm on Thursday January 14, 2016, at El Rincon Elementary (minutes of our previous meeting).  We will be holding elections for our Board, and discussing issues of concern to our neighborhood including coyotes, West L.A. College and the soundwall, the oil fields, and neighborhood watch.

The CCNA board is comprised of 9 members serving two year terms, of which half come up for reelection on any given year.  There are four seats up for election this year, though this year there are normally 4 seats up for election, but a fifth has opened up.  Nominations for board seats are still open.  Please email rich@richkissel.com if you are interested in running.

There will be a special meeting of the Culver Crest Neighborhood Association this Wednesday, December 2nd, at 7pm at El Rincon School.

The meeting is a collaboration with City Administration, CCPD,  Animal Control and a representative from the State of California Fish and Wildlife Department.

The purpose is to discuss the Coyote problem and work through some ideas on how to resolve the increasingly bold attacks on pets in the neighborhood.